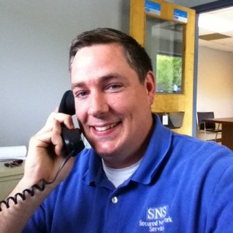 While Kevin Low was hesitant to give up a high-paying job, he knew that self-employment was his destiny.

He found the transition from employee to CEO to be rather natural, mostly because he had faith in himself and was determined to succeed.

“As the son of an entrepreneur, my father raised me to be a businessman,” Kevin revealed. “He was always talking about business, and I learned to love the interactions that he had with door-to-door salesmen in the 1980’s.”

When Kevin’s father started the company Network Systems in 1985, he involved Kevin in loading DOS operating systems and PFS First Choice programs onto computers. Kevin went to University of Rhode Island (URI) in 1994 and worked as a computer technician for residential life. He then took a year off to work for GE IT Solutions at Mitre Corporation, where he realized that networking was his niche.

As a senior at URI, Kevin was encouraged to apply to Computer Sciences Corporation and was hired as a network specialist, working on the General Dynamics account at the Electric Boat submarine plant in Rhode Island. “It was a fun time to be at a submarine plant, preparing the network for the Y2K bug in 1999,” he recalled. “After successfully defeating Y2K, I achieved Cisco Systems Professional-level certifications and worked as a networking consultant in and around Boston.”

Kevin helped to build and disassemble the dot-com boom, while making it possible for 300+ businesses to have Internet connectivity. Eventually, he realized that everything was leading him to the birth of SNS. He explained, “The entrepreneurial spirit awakened, and I realized that, at 27 years old, it was the time for a change.”

Kevin understood that IT is more than hardware sales and installations. As companies were adding IT departments, IT played a new and important role in business success. “I was born at the right time. I was always in IT,” pondered Kevin, “which gave me a valuable perspective. I concluded that the demand would only increase and that I could save the IT world with SNS — one client at a time.”

Kevin made business contacts in the Boston area, but his family was the best resource for his startup. He shared, “My sister was self-employed and encouraged me to go it on my own. Whenever I had doubts, she said it was normal and I would succeed.” Kevin also reflected on the fact that his late father founded two businesses and provided for four children. “If my dad and sister could do it, so could I,” he declared.

SNS pursued a Rhode Island location before looking to create a second data center in RI, NH, VT, or NY. They spent a considerable amount of time selecting the perfect location for a new service territory, knowing that they had unique needs to accommodate. That is when Kevin found a building in Littleton, NH, and after some research, he contacted the Department of Resources and Economic Development (DRED).

DRED immediately stood out from those in other states. “They were great to work with and gave my team an excellent presentation on ‘Why NH?’” Kevin said. He began to feel like New Hampshire was a hidden gem:

The folks from DRED became part of our expansion team and helped in every way possible, from looking at sites to helping with negotiations, discussions, and introductions. I saw that I was entering a community in NH — something that I hadn’t felt or experienced until then. It was clear that NH wanted SNS, and they made it easy to say “yes.”

When it comes to staying fresh and serving customers well, Kevin believes it is vital to hire good people, who are dedicated and passionate about what they do. “They will keep you motivated and excited to go to work every day,” he communicated.

Kevin still focuses on improvements and strives to make progress. “I’ve found the secret to making this happen is to always have a mentor (or three), to learn from others, and to keep moving,” he urged. “Work hard, be honest, smile, ask for help when you need it, and always believe!”

Connect with Secured Network Services on Facebook and LinkedIn