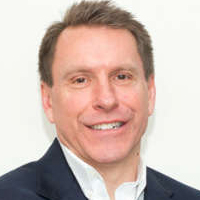 In nearly sixteen years, RAPID has grown continuously, now employing over 325 people and manufacturing prototypes around the clock. From its first days throughout its entire growth, the production of a quality product in a timely manner has always been the central focus of RAPID and the fuel to its success.

Prior to founding RAPID, Jay Jacobs worked in 3D Printing and Additive Manufacturing, giving him great insight and knowledge into the industry. He then worked as a Manufacturer’s Representative and there, Jacobs found himself “fighting to get quotes to customers in less than two weeks and struggled even more to get the parts within a month,” due to the lengthy turnaround periods in the manufacturing industry at the time. His prior experience allowed Jacobs to see an opportunity to synthesize his extensive knowledge of manufacturing with the potential that 3D printing technology presented to expedite the modelling process. And thus, RAPID was born. 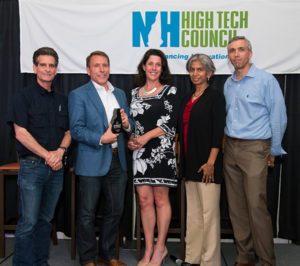 Jay Jacobs, CEO and founder of RAPID, was named the 2017 Entrepreneur of the Year at the NH High Tech Council’s annual celebration on June 14. Jacobs, pictured second from left, was presented with the award by technology entrepreneur Dean Kamen (pictured far left). Michelline Dufort (center), director of business relations for the Council, Toral Cowieson of the Internet Society and the Council’s board chair, and Matt Benson (far right) of Cook Little Rosenblatt and Manson.

Seeing the need for a more efficient manufacturing process, Jacobs seized the opportunity to purchase a small Nashua machine shop and began to make his ideas a reality. RAPID’s growth was initially slow, but consistent. Opening its doors just three days after the tragedy on September 11th, 2001, RAPID was born in the midst of a recession.

The help and support of his family, friends, mentors, and community allowed Jacobs to continue to expand his company and continue to drive its values today. In those initial years, Jacobs says that RAPID’s growth “was a gradual process” and he had a team of people relying on [him] to keep the doors open and keep them employed.” The resilience and loyalty of RAPID’s team allowed them to carry on in the midst of those difficult years. In nearly sixteen years of operation, RAPID has only grown, never laying off a single employee, despite enduring a second economic recession in 2009. Moreover, giving back to the community has been a central focus of the organization. Throughout its growth, RAPID has assisted and collaborated with Nashua Community College, local FIRST robotics teams, as well as other local charities, solidifying its presence in the greater community.

Emerging out of frustration with the pre-existing prototyping process, RAPID prioritizes customer satisfaction, a value that has remained central to the company as it has developed. Innovation for them is always driven by this desire to continuously produce a good product that will satisfy their customers.

Resilience, hard work, and planning are central to the success of RAPID. Jacobs says that the best advice he received was to respect that “cash is king” and to “make sure you raise more money than you think you need.” His experience proved this wisdom to be true. The economy, a force far outside of the control of a single company, proved to be the largest force in opposition to RAPID’s growth. When Jacobs began, he planned ahead for the worst. This paid off, both permitting and fueling RAPID’s perpetual growth. He credits this advanced preparation for enabling RAPID to survive those difficult first few years and continue to expand in the midst of a difficult economy. “No matter how well you plan,” Jacobs says, “reality will be different.” For those just starting out, Jacobs asks: “Are you all in? Are you willing to work 80 to 100 hours a week and potentially sacrifice your friends, family, health, and savings to be successful?” RAPID’s success proves that such relentless devotion to churning out a quality product and establishing one’s company is a strong model by which to construct a startup.

As it looks to the future, RAPID plans to continue to hire more people, expanding the size and talent of its team. Recently, they have expanded their services to include five-day machined lathed parts and flat sheet metal parts, in addition to Wire EDM and Waterjet Cutting services. Moreover, they have expanded their materials list to also include titanium. They plan to continue to expand their services and materials list, broadening their markets and continuing to reduce the lead time for parts. The expansion, however, will always be guided by the same dedication to quality and customer satisfaction that has driven their success over the last sixteen years and will sustain it into the future.